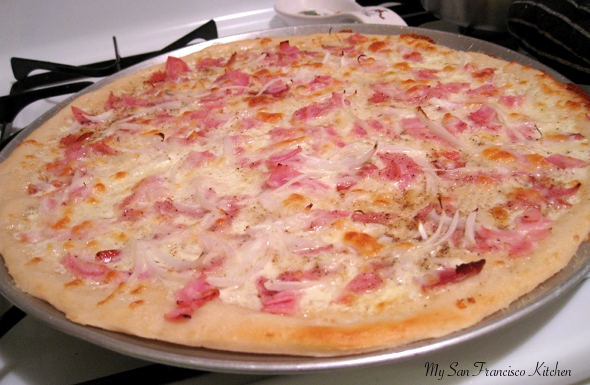 Flammkuchen has to be one of my FAVORITE German dishes. It is delicious! The first time I tried it was in the Spring of 2010, when I lived in Germany for a few months. I fell in love with this dish. Its almost like a pizza, but instead of pizza sauce, creme fraiche is used. You can get a really delicious and inexpensive creme fraiche at Trader Joe’s, and I have seen it at other chain grocery stores in the US, but it can be quite expensive.  This traditional German flammkuchen recipe is a basic one, for there are many variations. Usually bacon or prosciutto is used, but I prefer to use ham slices to keep it healthier. Tomatoes, corn, zucchini or basil, are some other toppings I have seen used at German restaurants. The possibilities are endless! Serve with a fresh salad. Tip: If you can’t find creme fraiche, try adding 2 tbsp buttermilk to 1 cup heavy whipping cream and let stand covered for 24h then refrigerate…you can also try sour cream, but it will taste a little different…