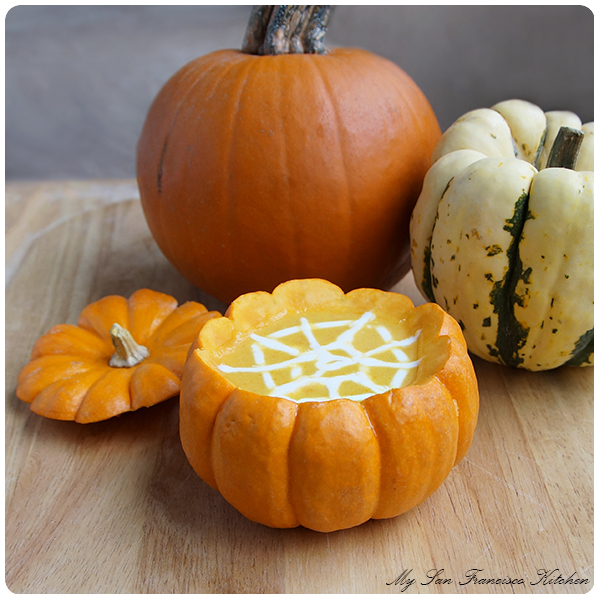 Homemade pumpkin soup made from scratch makes me so happy. It is one of my favorite comfort foods during the fall season. I can’t take credit for the cute pumpkin bowl idea though, that was all my husband! One day when I was working on something for my blog, he said “Why don’t you make pumpkin soup and serve it in a pumpkin?” Brilliant! I have never seen that before, but he told me his mom has done it before. I thought this was such a cool idea, so today I went to Safeway and bought some pumpkins. I also decorated the tops with “spider webs” using cream (see tutorial in the instructions part of the recipe). Here are some things I learned during the process of making the pumpkin soup from scratch:

1) You don’t need to buy the biggest pumpkin in the patch…a medium one will do just fine.

3) After watching a “How to Skin a Pumpkin” video on YouTube, don’t think you can do it in 3 minutes too since it looked so incredibly easy when the pro chef did it…oops.

4) Dedicate at least 20 minutes for wrestling with your pumpkin, trying to cut all the skin off, scooping out the seeds, and chopping it up.

Sooo although this was one of the more challenging dishes I’ve made, in the end it was SO WORTH IT. My husband and I both agreed this has been the best soup I have ever made. Too bad it involves so much work, but pumpkin soup from scratch tastes 1000000000x better than just using canned pumpkin. Its amazing.